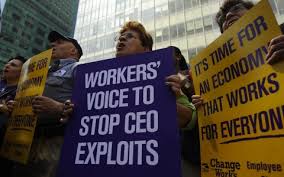 The pay gap between workers and CEOs at America’s largest low-wage employers is now 670 to 1. That’s obscene.

Working families are getting hammered by inflation while corporate leaders and politicians are calling for belt-tightening. But there’s one group of Americans that’s actually profited from increasing prices.

Big company CEOs have enjoyed soaring pay, even as their employees have been struggling to keep their families safe and their bills paid.

Look at Target, for example. Last year, the median Target worker salary did not even keep pace with inflation, rising by less than 4 percent to just $25,501.

Did the giant retailer lack the money to make sure wages kept up with rising prices?

When a company repurchases their own shares, it does nothing for workers. Instead, it makes rich CEOs even richer by artificially inflating the value of their stock-based pay. Last year, Target CEO Brian Cornell made $19.8 million, which is 775 times more than the median pay for his employees.

How do CEOs get away with making hundreds of times more than their workers? Corporate pay practices are still based on the ridiculous notion that the “genius” in the corner office is almost single-handedly responsible for company value.

This was always pure nonsense, but during the pandemic it became even clearer that lower-level workers are essential to their companies and our whole economy.

Target is just one example of corporate America’s obscene disparities. At the Institute for Policy Studies, we looked at 300 low-wage employers and found that the average gap between CEO and worker pay rose to 670 to 1 in 2021. That was up from an already obscene 604 to 1 the year before.

And among the companies where worker pay fell below inflation, about two-thirds spent huge sums on stock buybacks to further enrich their CEOs. With such extreme unfairness, it’s no wonder we’re seeing record numbers of workers quitting their jobs and a surge in unionization.

One recent poll shows 87 percent of Americans view the growing gap between CEO and worker pay as a problem for the whole nation.

What can we do about it?

Workers can fight for equitable pay through collective bargaining. In other countries with higher unionization rates, CEOs tend to earn much less than their U.S. counterparts. In Canada, for example, the share of workers who are union members is about triple the rate in the United States, while average CEO pay there is less than half the U.S. level.

But policymakers need to step up as well.

On Capitol Hill, one pending bill would use tax incentives to encourage companies to narrow their divides — the wider the gap between a company’s CEO and worker pay, the higher their corporate tax rate. But companies with narrow gaps wouldn’t owe an extra dime.

President Biden could also take action on his own without waiting on Congress.

For instance, he could make it hard for companies with huge pay gaps to land lucrative federal contracts. That would have a big impact, because federal contractors employ an estimated 25 percent of the private sector workforce.

Biden could also ban contractor CEOs from personally profiting from stock buybacks. And he could order contractors to be neutral in union organizing drives. That would help combat the union-busting we’ve seen at some major federal contractors, like Amazon.

These kinds of executive actions would build on Biden’s executive order requiring federal contractors to pay a minimum of $15 an hour.

By wielding the power of the public purse against excessive CEO pay, the president could strike another blow against extreme inequality. All workers, up and down the corporate ladder, deserve a fair share of the wealth they create.

Sarah Anderson directs the Global Economy Project at the Institute for Policy Studies and co-edits Inequality.org. This op-ed is adapted from a video produced by More Perfect Union and distributed by OtherWords.org.