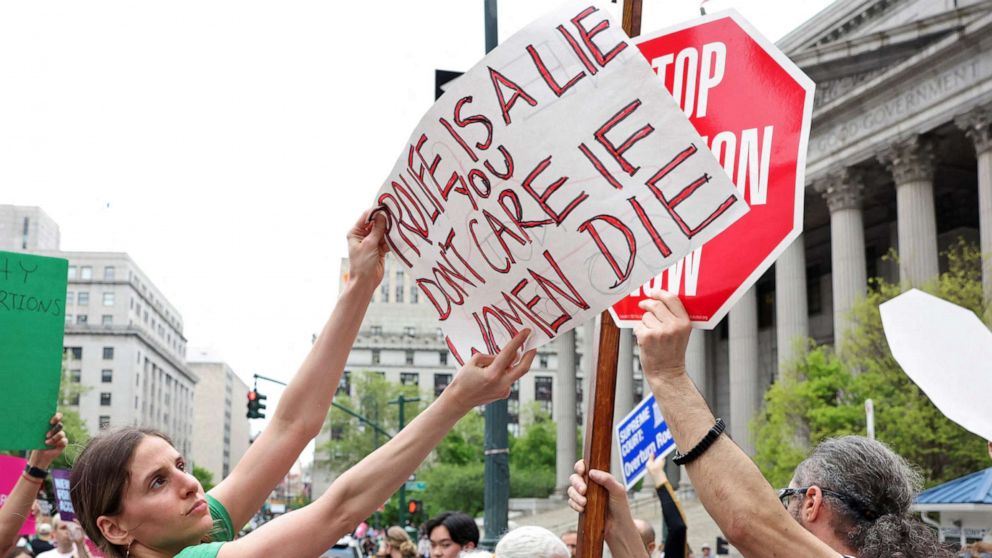 Stories abound of conservative women who picket out front of clinics quietly coming in the back to get their own abortions.

The Supreme Court’s decision to overturn Roe v. Wade was as predictable as it was shocking. Right-wing forces have spent years working to erase the right to abortion, and — for now — they have won.

Contrary to the idea that men have foisted the abortion ban on women, though, the ban is a patriarchal attack by conservatives — men and women — on the rest of us.

There’s a general attitude that forms the basis of most right-wing attacks: that the denial of rights will only affect someone else — someone who deserves it. But when conservatives are personally impacted, they’re an exception.

Stories abound of conservative women who picket out front of abortion clinics quietly coming in the back to get their own abortions. One provider told The Daily Beast, “All of us who do abortions see patients quite regularly who tell us, ‘I’m not pro-choice, but I just can’t continue this pregnancy.’”

She added, “These are not people who turn anti-choice after having an abortion, but who simply access this essential service when they need it in spite of their personal beliefs about abortion in general.”

A survey of women who’ve had abortions by the fundamentalist Christian group Care Net suggests that many of these women belong to conservative churches. Over 40 percent of their respondents reported attending services regularly.

It’s a classic case of “do as I say, not as I do.” This selfish logic informs many conservative positions.

Take gun violence. Those who support the complete availability of guns seem to have no problem surrendering that right when it comes to protecting the powerful.

But the rest of us — even children and the elderly — have to risk living among armed and dangerous people.

Republican politicians have made it their mission to slash what they call “entitlement” programs. But their voters often rely most heavily on food stamps and other benefits. In polls, white Americans, who are overrepresented among conservatives, tend to support welfare programs — until they discover those programs might also help people of color.

Conservatives and Republicans want to make it harder for people to vote, premised on the false claim that many people vote for Democrats illegally. But most of the very small handful of people caught illegally voting have turned out to be Republicans.

Circling back, many religious conservatives seem to believe that abortion is the first resort of promiscuous teen teenagers.

In reality, today’s typical abortion patient is a low-income woman in her late 20s who has already had one child and cannot afford another one. In fact, nearly a quarter of all people capable of pregnancy will have one in their lifetimes by age 45. That percentage may be even higher considering that researchers find people severely underreport their abortions.

It’s a fair bet that if anti-abortionists had a way to ensure their own personal access to abortion when they needed it, and a ban for everyone else, they’d do it.

Of course, the religious right didn’t do this on their own. So-called liberals in Hollywood have written anti-abortion tropes into their plot lines for decades, and Democrats in office failed to codify these rights when they had the chance.

Years of invisibility and shame paved the road to Roe’s reversal. But now, more and more people are coming forward to tell their stories, revealing abortion as the mundane and shame-free health procedure that it is.

These stories will be crucial to tell. And when anti-abortion conservatives — victims of their own success — need an abortion have nowhere to turn to, I hope we’ll hear their stories too. When you’re no longer the exception to the rule, it’s harder to be selfish.

Sonali Kolhatkar is the host of “Rising Up With Sonali,” a television and radio show on Free Speech TV and Pacifica stations. This commentary was produced by the Economy for All project at the Independent Media Institute and adapted by OtherWords.org.