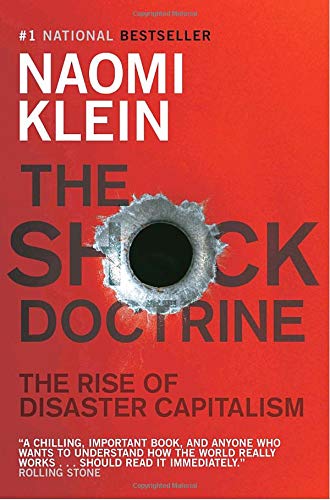 Since schools and workplaces have resumed regular operations, the stock market has been up and capitalism once again is saved.

Saved at the price of public health, welfare, and safety.

But this is nothing new to capitalism – this is the way capitalism has operated in the modern world. This mode of capitalism is called disaster capitalism. Disaster capitalism is defined as “the practice (by a government, regime, etc.) of taking advantage of a major disaster to adopt neoliberal economic policies that the population would be less likely to accept under normal circumstances” (Harper Collins).

Capitalism has been revived and survived time and time again through a dependency upon disaster after disaster to turn what should be a humanitarian effort into a market for profit. Naomi Klein, author of many books include The Shock Doctrine: The Rise of Disaster Capitalism, states in her article on The Guardian (how power profits from disaster) that:

This strategy has been a silent partner to the imposition of neoliberalism for more than 40 years. Shock tactics follow a clear pattern: wait for a crisis (or even, in some instances, as in Chile or Russia, help foment one), declare a moment of what is sometimes called “extraordinary politics”, suspend some or all democratic norms – and then ram the corporate wishlist through as quickly as possible. The research showed that virtually any tumultuous situation, if framed with sufficient hysteria by political leaders, could serve this softening-up function. It could be an event as radical as a military coup, but the economic shock of a market or budget crisis would also do the trick. Amid hyperinflation or a banking collapse, for instance, the country’s governing elites were frequently able to sell a panicked population on the necessity for attacks on social protections, or enormous bailouts to prop up the financial private sector – because the alternative, they claimed, was outright economic apocalypse.

Considering what capitalism has cost us, is that threat of economic collapse really enough to continue this system of exploitation at a time when humankind needs to make major changes – changes in order to make this planet habitable and to battle an ongoing global pandemic – really a threat or something that direly needs to happen?

But disaster is a booming business and capitalists are making billions of dollars, and subsequently reinvigorating the market, time and time again. In an article in The Nation, “The Rise of Disaster Capitalism,” Klein highlights the profitability of these reconstruction industries:

And there is no doubt that there are profits to be made in the reconstruction business. There are massive engineering and supplies contracts ($10 billion to Halliburton in Iraq and Afghanistan alone); “democracy building” has exploded into a $2 billion industry; and times have never been better for public-sector consultants–the private firms that advise governments on selling off their assets, often running government services themselves as subcontractors. (Bearing Point, the favored of these firms in the United States, reported that the revenues for its “public services” division “had quadrupled in just five years,” and the profits are huge: $342 million in 2002–a profit margin of 35 percent.)

To be clear: the motivation of these industries that rebuild after disasters, and profit off of human suffering and need, are not there to make long term structures and changes that benefit the population in need and alleviate human suffering. Their primary and only drive for reconstruction is profit. In the same article as above, Klein elaborates:

Three months after the tsunami hit Aceh, the New York Times ran a distressing story reporting that “almost nothing seems to have been done to begin repairs and rebuilding.” The dispatch could easily have come from Iraq, where, as the Los Angeles Times just reported, all of Bechtel’s allegedly rebuilt water plants have started to break down, one more in an endless litany of reconstruction screw-ups. It could also have come from Afghanistan, where President Hamid Karzai recently blasted “corrupt, wasteful and unaccountable” foreign contractors for “squandering the precious resources that Afghanistan received in aid.” Or from Sri Lanka, where 600,000 people who lost their homes in the tsunami are still languishing in temporary camps. One hundred days after the giant waves hit, Herman Kumara, head of the National Fisheries Solidarity Movement in Negombo, Sri Lanka, sent out a desperate e-mail to colleagues around the world. “The funds received for the benefit of the victims are directed to the benefit of the privileged few, not to the real victims,” he wrote. “Our voices are not heard and not allowed to be voiced.”

But if the reconstruction industry is stunningly inept at rebuilding, that may be because rebuilding is not its primary purpose. According to Guttal, “It’s not reconstruction at all–it’s about reshaping everything.” If anything, the stories of corruption and incompetence serve to mask this deeper scandal: the rise of a predatory form of disaster capitalism that uses the desperation and fear created by catastrophe to engage in radical social and economic engineering. And on this front, the reconstruction industry works so quickly and efficiently that the privatizations and land grabs are usually locked in before the local population knows what hit them. Kumara, in another e-mail, warns that Sri Lanka is now facing “a second tsunami of corporate globalization and militarization,” potentially even more devastating than the first. “We see this as a plan of action amidst the tsunami crisis to hand over the sea and the coast to foreign corporations and tourism, with military assistance from the US Marines.”

Capitalists and capitalism is concerned with one thing and one thing only: profit. When aid is sent to countries who have been struck by war (usually U.S. backed), famine, or natural disasters, capitalists put profit before people and reconstruct with the bourgeoisie in mind or western tourism, leaving natives still in need.

Disaster capitalism is yet another mode of capitalism which exploits and alienates the masses while profiting and benefitting the few. No matter what label we put in front of capitalism, the end result is always the same: a system that is destroying us, destroying the habitability of the planet, and a system that has to end if we have any hope of surviving.