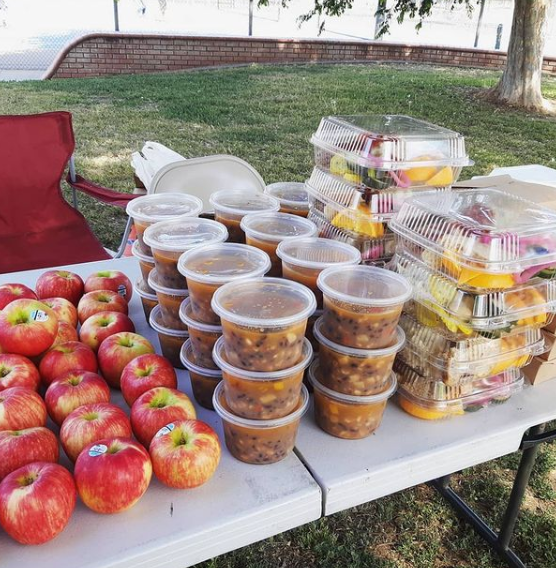 For the past year in Riverside, CA, there’s been a huge resurgence of mutual aid groups in response to the city, county, and state falling short in its support of people during the COVID-19 crises. While I have the most experience organizing, cooking, and distributing food as part of Riverside Food Not Bombs, I and my other comrades in the area have also worked with multiple mutual aid groups and organizations in putting on a large free market, called the Riverside People’s Free Market. Together, for two or more weekends a month (depending on the organization), we’ve fed, clothed, given out sanitation goods, handed out sleeping bags and tents, wagons, water, first aid, and more to over 100 people per weekend we get together.

The first is in Riverside at Fairmont Park (by the tennis courts – we have it marked on Google Maps) on the second Saturday of the month from 10 a.m. to 2 p.m. which includes the following organizations: Riverside Food Not Bombs, Riverside Mutual Aid, CAT-911 (Riverside), Communit(IE), Punks in the Park, SJH Mutual Aid, and the Concerned UUS of Riverside.

The second is in San Bernardino called the San Bernardino Free Market which takes place the fourth Saturday of the month from 10 a.m. to 2 p.m. at Seccombe Lake Recreation Area (106 E. 5th St., San Bernardino, CA). Many of the same organizations that support the Riverside People’s Free Market also contribute to the SB Free Market and they receive additional help from the HygIEne Project.

For those that aren’t aware of what mutual aid is and what Food Not Bombs does specifically, here’s the mission statement for Riverside Food Not Bombs:

When a billion people go hungry each day, how can we spend another dollar on cops? Food Not Bombs is an all-volunteer movement that recovers food that would otherwise be discarded, and shares free vegan and vegetarian meals with the hungry in over 1,000 cities in 65 countries in protest to war, poverty, and destruction of the environment. We are not a charity but dedicated to taking nonviolent direct action. Our movement has no headquarters or positions of leadership and we use the process of consensus to make decisions. We also provide food and supplies to the survivors of natural disasters, and people participating in occupations, strikes, marches and other protests.

Delving a little further into how we started our chapter, Food Not Bombs is an international mutual aid organization where anyone, as long as they follow some pretty loose guidelines and health protocols (e.g. vegan and vegetarian food, no dumpster diving, try to avoid capitalism as much as possible when obtaining goods, etc.), can start their own chapter. We’ve personally also taken extra precautions with COVID and have added a layer of prep where everything is made with gloves and a mask in a sanitized kitchen and all the food is individually packaged for distribution.

There is a national website for Food Not Bombs, but honestly, it doesn’t seem to be getting updated with new chapters all that quickly. Riverside Food Not Bombs was revived by community members who have previous experience organizing – IEDSA, the Cost of Living Adjustment (COLA) Protests at UCR, and other anarchists in the area. To get started, we made an Instagram and instantly we were getting support from the community and people were hitting us up to give us donations. We started meeting regularly over Zoom and asked people that we knew from other organizations like Riverside Mutual Aid, IE Community Fridges, IEDSA, and the Universalist Unitarian Church in Riverside to help us with donations and events to get started. We were lucky to have so many connections, but those are just how we grew so fast – connections aren’t necessary to get started.

The steps on the Food Not Bombs website are pretty solid in starting up your own chapter; first and foremost, get a group of core volunteers you know will be down to do the work. We have that plus people who come and go and it’s worked well so far. Next, create some social media profiles and start doing community outreach and have a meeting to find some community support and additional members. After that, finding food (calling grocery stores and letting them know you’re a “gleaner” looking for goods for donation before they’re put out, reaching out to food banks, connecting with workers in restaurants and getting end of the day food that they can’t reuse, and in an area like ours with a lot of farms, reaching out directly to farms like Overflow Farms.) and set a date and location (parks are always a good place to start) to start distributing it. Pretty soon you have supply lines, a bunch of volunteers, and an org with no official leadership where everyone does their part to support their community.

Our mission statement is very much our own creation that goes off of the national Food Not Bombs anti-war and pro-community model, and we specifically address the issues we have in our community with police and policing when we say not a single dime of city, county, state, or national funds should go to police and policing.  From what we’ve been told, the previous Riverside Food Not Bombs used to do service in White Park until the Riverside PD shut them down for having “bomb” in their name and being a “terrorist organization” because of it. Apparently, the Riverside Police don’t know what the word “not” means.

We haven’t directly been targeted by police yet, but when we do service at the Riverside People’s Free Market in Fairmount Park police always show up, drive by slowly, and we’re pretty sure are collecting information on our license plates. We wear masks (because of COVID but also it’s standard anarchist practice because of police identification), but the police try to size us up too. We’re just sitting there giving out food and clothes in a public space so, so far, they haven’t been able to say anything to us.

The city, strangely enough, has reached out to us multiple times about providing food and aid to the unhoused in shelters and at various events. We’re an all-volunteer org made up mostly students, be it graduate, recently graduated, or undergrads at both UCR and RCC, and have absolutely no fiscal support for what we do outside of donations from people wanting to feed or shelter their unhoused community members. We’re baffled the city is reaching out to us rather than using public funds to help people. We do what we can, but we should not be a principal provider for the city’s unhoused programs; that’s on the city and how they choose to fund a violent police force over helping the unhoused and other people in need. The city shouldn’t be using us as a charity or approaching us like we are a charity because that’s not what mutual aid is. We do support the city when they do endeavors like the Free Little Pantry program and we actively help stock pantries in the area with excess donations, but our goal first and foremost is to feed people in need and our secondary goal is to avoid doing so through capitalist measures and to instead rely on the community and volunteer labor to provide what the city does not.

Mutual aid is the community taking care of the community unconditionally. If we give you a meal, we don’t care what your background is, where you are from, what your record is, what your income level is, what your housing status is, etc. That’s not true with charity and with city resources. Often, these things come with conditions – you have to have a certain income level to qualify as needing aid, you can’t have a criminal history, you can’t be addicted to anything or must give up what you have in order to get help, you have to be a citizen, etc. We don’t judge. We don’t restrict. We give freely and want nothing in return. What we do is for the community we’re apart of because we see that the community is in need. We’re not paid. We often, those of us that are fiscally more stable and work or have a regular stipend from being graduate students, spend money out of pocket to make aid happen. Charity workers do have volunteers but often their boards are paid and their workers are paid. Money given to charities and labor given to charities does not go directly to the people in need of help.

Without capitalism, charity wouldn’t need to exist but the same cannot be said for mutual aid. Charity is often a tax write off or addresses specific gaps in the capitalist system that exist due to exploitation. Mutual aid, on the other hand, is not about filling in gaps caused by exploitation. The community will always need to take care of each other – that’s the social contract we sign as being part of that community. If your neighbor is in need, you come together and you help. If your community is hurting, you do what you can to make it better. Our motto is step up when you’re able and trust your comrades to step up when you aren’t able. We believe in solidarity, not charity. That should be how all aspects of community function, in our eyes.